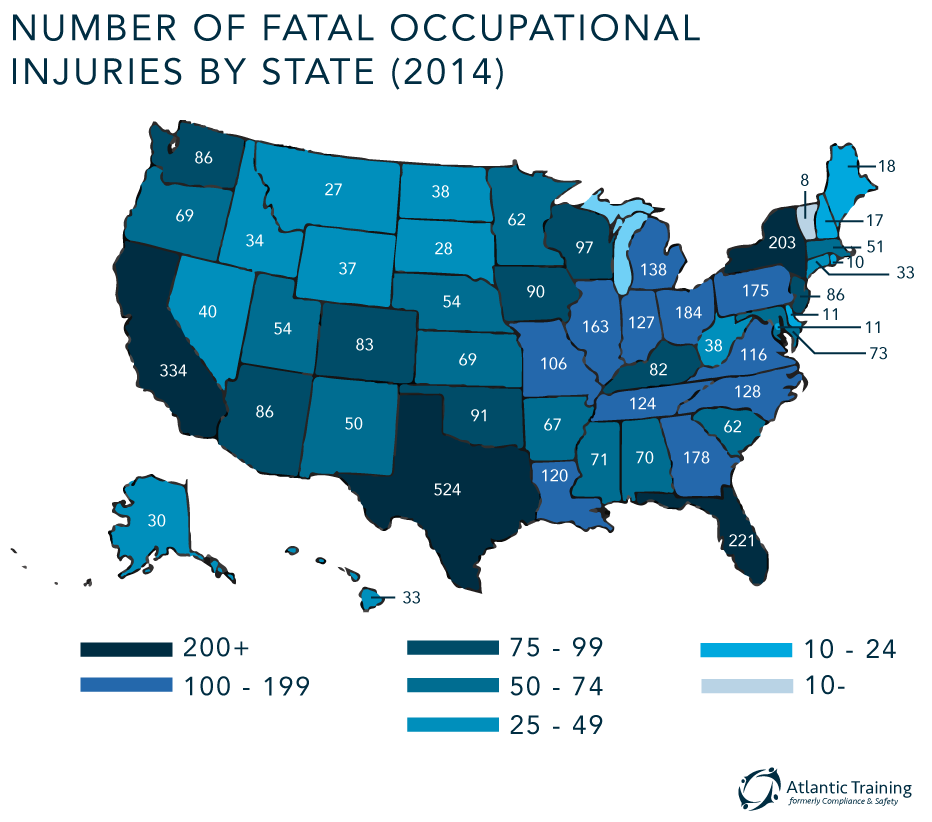 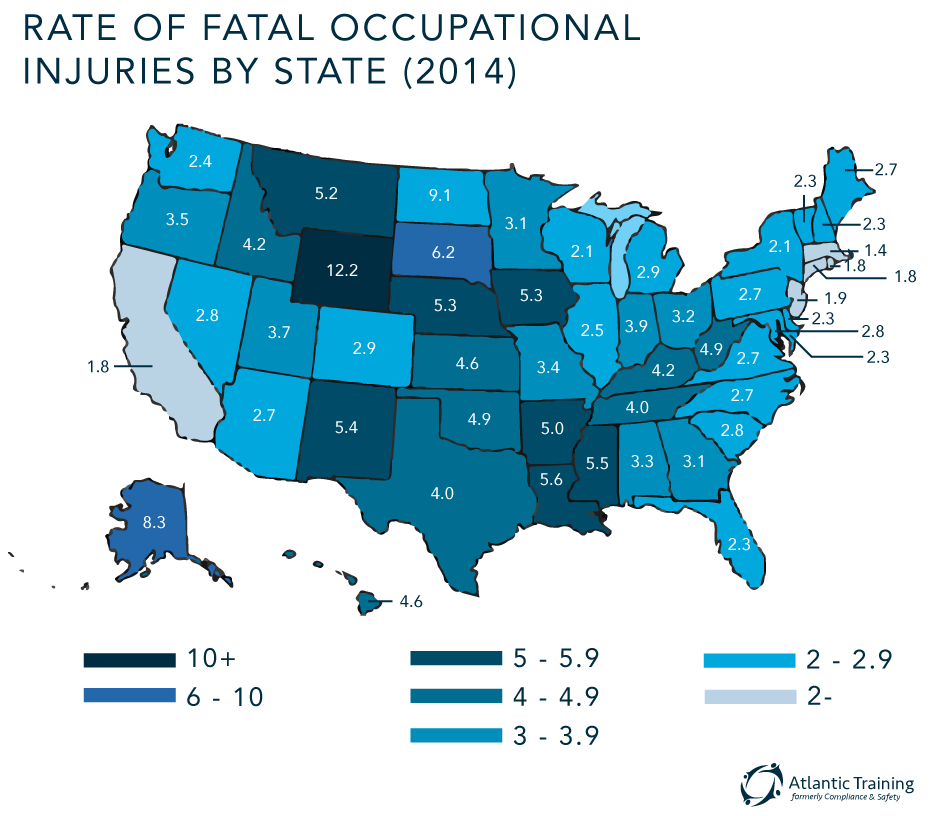 Non-fatal occupational injuries and illnesses across industries have also shown a marked decline over the years, down from nearly 1.26 million in 2004 to just over 916,000 in 2014. 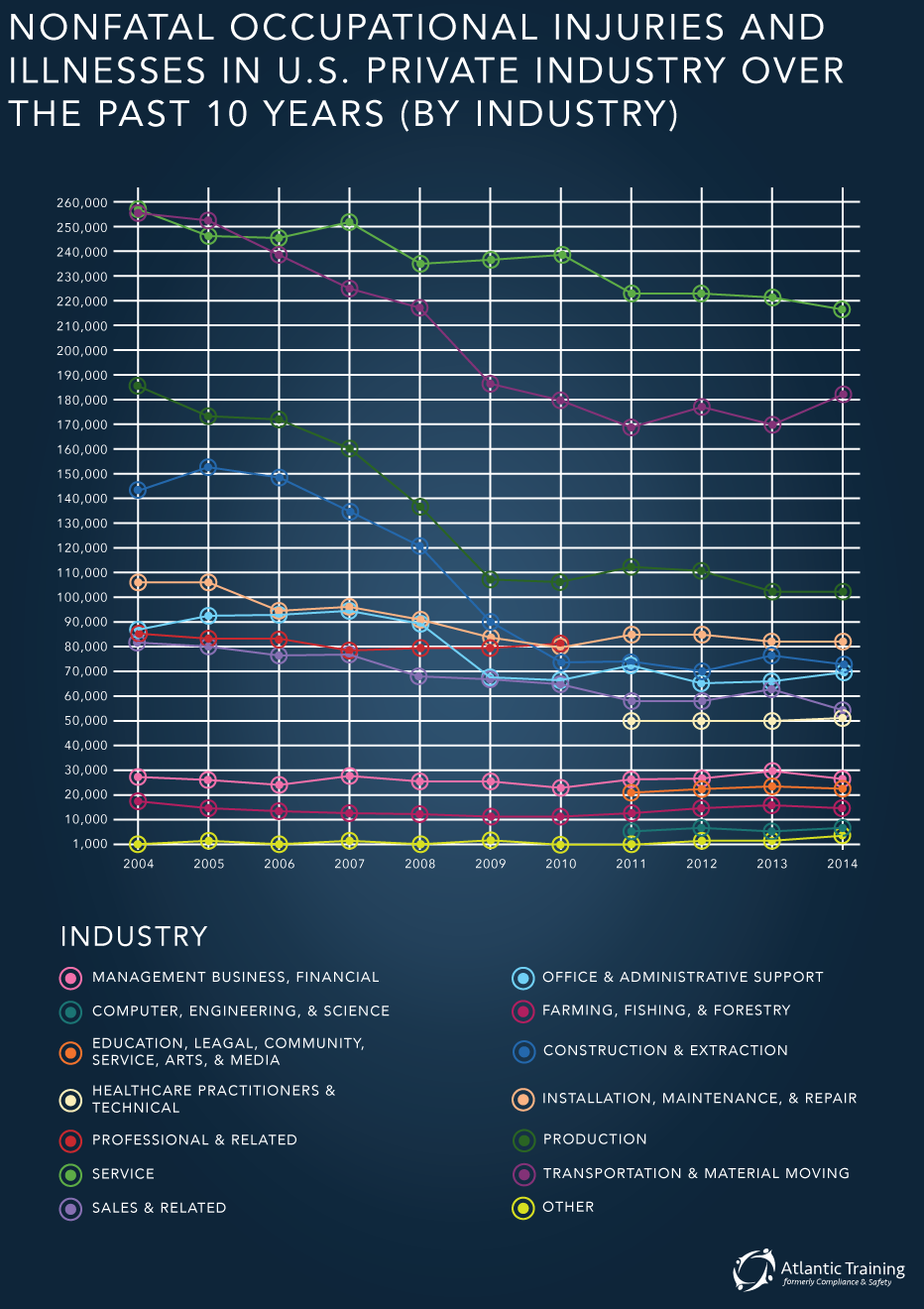 No doubt, this pattern of decline is largely attributable to a number of factors, including stronger regulation, better and more frequent safety training, greater focus on worker rights, and increased liability.  Both state and federal regulations give workers better protection than ever before, and safety training materials designed to help companies comply with those regulations are constantly being made more widely available, more effective, and better developed.

A closer look at Bureau of Labor Statistics data reveals some interesting insights.

When it comes to workplace injuries and fatalities, four industries stand out as the most vulnerable: Agriculture, Forestry, Fishing & Hunting (25 fatalities per 100,000 workers); Mining, Quarrying, Oil & Gas Extraction (14 per 100,000); Transportation & Warehousing (13.5); and Construction (9.5).  This comes as no surprise, given the physical nature of much of the work in these industries and the prevalence of more dangerous heavy equipment and less easily controlled working conditions.  But there may be other factors that contribute to the increased risk in these fields. 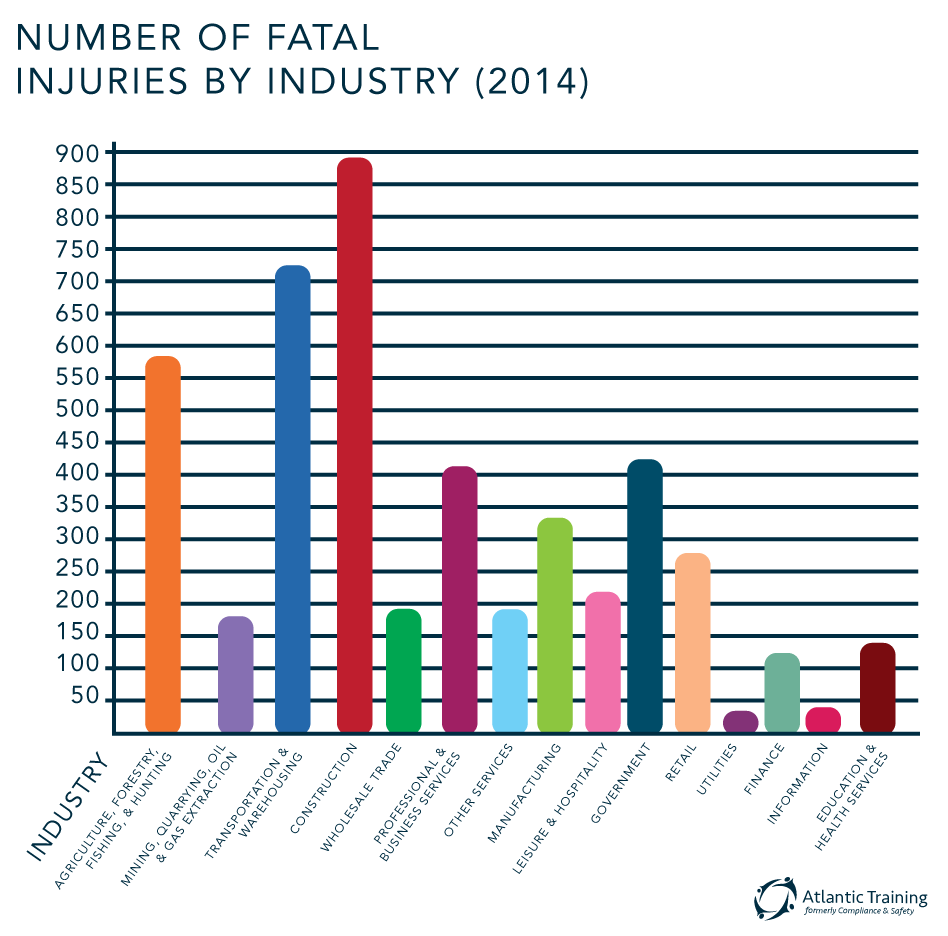 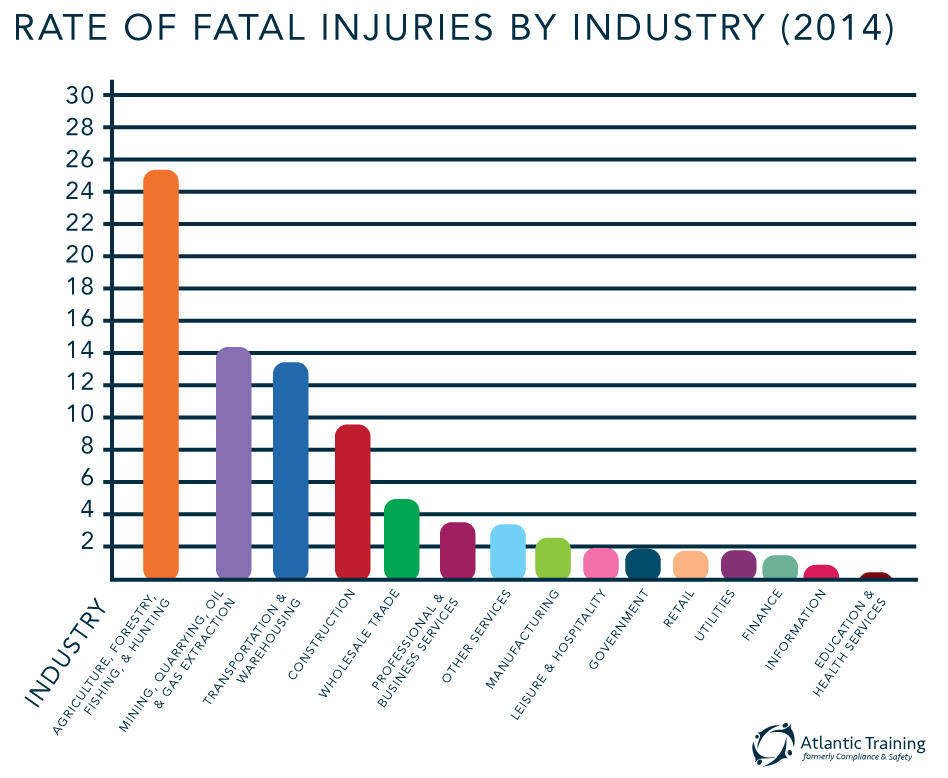 It is interesting to note that two of these fatal four industries – Agriculture, Forestry, Fishing & Hunting and Construction – also rank among the industries with the highest percentage of self-employed workers.  According to the Bureau of Labor Statistics, while the overall number workplace fatalities has fallen by almost 19% in the last ten years, the number of fatal accidents among self-employed workers and those they hire has been reduced by only 11%.

You will find more statistics at Statista

Though this correlation may not be indicative of a causal relationship, a couple of theories easily present themselves in explanation.

The first suggests that these industries are, by their nature, more dangerous and are necessarily prone to higher incident rates.  The concentration of self-employed workers engaged in them would, then, inevitably lead to higher concentrations of accidents among the workers in those industries.  The result would, of course, be a slower decline in incident rates in both these industries and self-employed workers, as these groups largely overlap.

Another possibility is that causality flows in the opposite direction.  Whereas large companies with thousands and hundreds of thousands of employees are able to employ entire departments to develop and enforce safety policies and training programs, self-employed workers with limited resources may find this more difficult.  Without well-developed and systematically enforced safety protocols, safety decisions are entirely reliant on the perceptions and and judgments of the individual, both of which are dangerously susceptible to error.

Regardless of which (if either) theory may prove out, statistics suggest that self-employed workers are wise to take extra care to ensure that they and those with whom they work are well trained in the safety precautions and regulations that pertain to their industry.  Not least because the responsibility to do so falls squarely and solely on their shoulders.

OSHA has produced a list of its most frequently violated standards of 2015.  While the violations calculated are by no means limited to the Mining, Quarrying, and Extraction industry (several, in fact, are notably frequent violations in Construction), it may be significant that it is one of the few industries in which all of the noted standards play a pivotal role in worker safety.

As we’ve said, it is the nature of this work that makes it especially vulnerable to fatal and catastrophic accidents.  But that heightened danger makes it that much more essential for standards to be strictly maintained.

Transportation & Warehousing faces a bit of a different challenge from its dangerous workplace counterparts in that forms part of a larger, though equally concerning, statistic.

According to the CDC (Centers for Disease Control and Prevention), injuries resulting from accidents are the leading cause of death among adults aged 25-44 and the third leading cause for those aged 45-64 (after cancer and heart disease).  In 2014, the CDC reported 136,053 accidental deaths.  Of those, 32,675 (24%) were the result of motor vehicle incidents.  As you can see from the pie chart below, transportation incidents were responsible for 40% of workplace fatalities in 2014.  About a quarter of those were associated with roadway accidents, in line with general statistics. 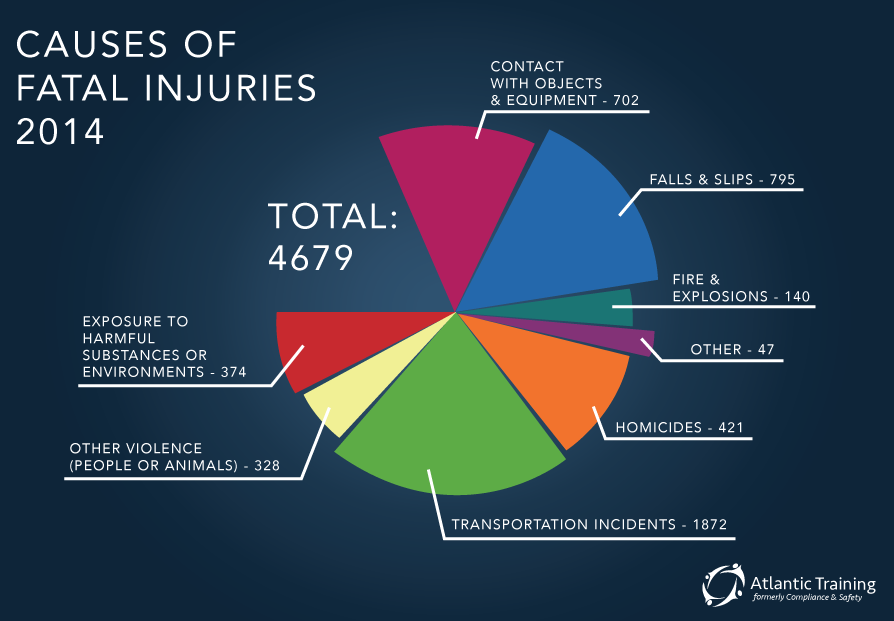 Nevertheless, that still leaves 30% of all fatal accidents attributable to transportation safety issues that cannot be blamed on the general hazard of driving.  Part of the challenge may be that regulations related to powered industrial trucks, which include forklifts, are among OSHA’s top ten most frequently cited hazards.

Within the Transportation & Warehousing industry, another of the top ten may also pose a serious threat – failure to comply with Hazard Communications Standards.  With almost 11% of fatal injuries resulting from exposure to harmful substances or from fire and explosions, it is easy to see how failure to comply with the standards that help workers avoid related dangers could have a significant effect in an industry that deals so directly with the handling of hazardous materials.

The past few decades have seen a remarkable decline in workplace injuries and fatalities.  Let’s keep that trend going by creating and implementing comprehensive, effective safety programs that help workers and companies enforce safety standards to the highest possible degree.